Well it’s that time of year when the shops are filled with hearts and flowers, love is in the air, and there is much rejoicing among card manufacturers! It’s nearly Saint Valentine’s Day. Celebration of the day devoted to sweethearts goes back to Roman times. 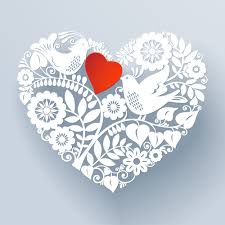 Cupid, a Roman god of love, today appears on greeting cards amid satin hearts and chocolates. But Cupid is not the only winged being linked to February 14th. Medieval Europeans believed that many birds mated on this day, underscoring the link of Valentine’s Day’s to affection and courtship. They pictured cozy pairs of doves as the epitome of love and devotion, thus the term “lovey-dovey.” Doves were the classic lovebirds, and favorites, too, of Cupid’s comely mother, Venus. Today, we cherish lovebirds from the pet shop. The lovebirds are diminutive parrots native to Africa. The colorful lovebirds are aptly, named for their snuggling behavior. They nestle close to one another, and gently preen each other’s head and neck with their red bills. Mutual preening helps keep the feathers clean precisely in those places where the mate cannot preen itself. But it’s also crucial in the lovebirds’ courtship, fostering enduring bonds between the pair.

It was once believed that if a woman noticed a robin flying overhead on Valentine’s Day, it meant she would marry a sailor. If the woman saw a sparrow, the would marry a poor man, but be very happy. If she spied a goldfinch, it was said that her husband would be a man of great wealth.

The origins of the most popular customs associated with Saint Valentine’s Day almost certainly trace their roots to a conventional belief generally accepted in England and France during the Middle Ages that on February 14 (halfway through the second month of the year), the birds began choose their mates. The reason for this assumption is somewhat clouded, but may be related to the fact that the first songbirds which traditionally warble after a blustery winter tend to debut in mid-February. One of the earliest written examples of this belief was penned by Geoffrey Chaucer an English poet, in his “Parliament of Fowls,” the literal meaning of which is “Meeting of Birds.” Chaucer’s poem was penned to honor the grand wedding of Richard II of England to Anne of Bohemia, which took place in January of 1382 and is generally regarded as one of the most successful and loving royal marriages of the Middle Ages…indeed, Richard and Anne rank among the leading romantic couples in history.

Birds inspire a lot of emotions—awe at their numbers, wonder at their brilliant colors, envy of their flight, delight in their song, concern for their future, and love, for the way many of them form long-lasting pair bonds and care for their young. Science is still undecided on the existence of complex emotions in birds—nevertheless, for Valentine’s Day, let’s all be inspired by them and whatever they represent to us.